There’s an old joke involving a mathematician and others on a deserted island which ends with the mathematician saying “Suppose you had a can opener.”, which of course they don’t and so it doesn’t solve the problem of opening their can of food.  Well this post is going to start with a mathematician stating “suppose you could get a constant 6% annual savings rate for 40 years” which of course you can’t.  The problem of long-term investing is a very complex problem and not just because you can’t get a constant unvarying return.  But let’s suppose you could get a constant rate of return and examine the effect of starting to save earlier rather than later and making a commitment to saving a life time goal.

I do have three kids but I won’t use their names just to save them from embarrassment.  Let’s just say the first kid starts saving $100 a month when he’s 25 and continues saving until he reaches 65.  The second kid starts saving the same amount when she turns 25 but decides she needs the income when she’s 35 and stops saving.  Lastly the third kid doesn’t start saving until he’s 35 but he continues until he’s 65.   The question is how well will each of them have done by the time they reach 65? 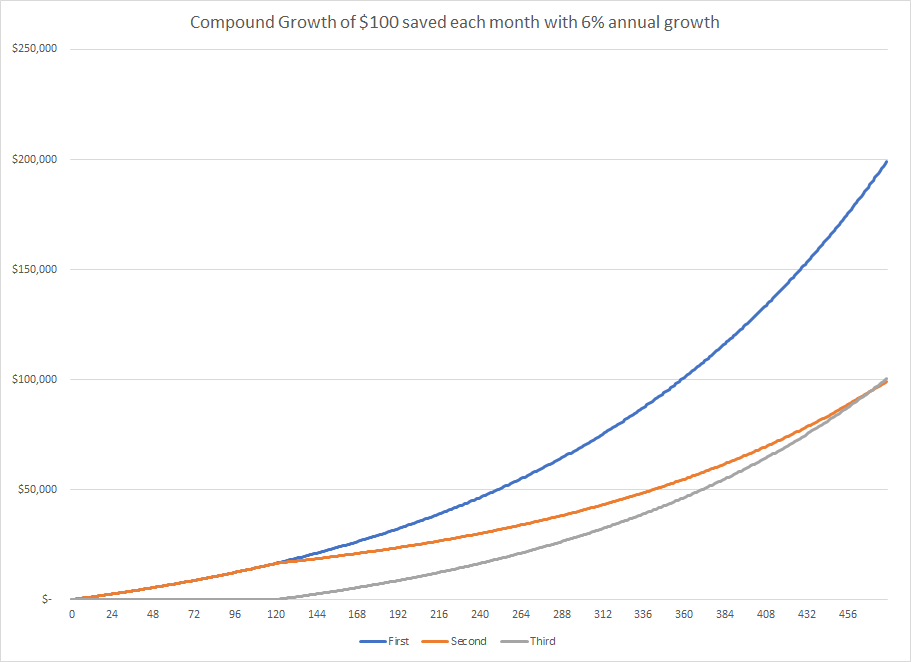 Clearly everyone has their own unique situation where things happen in life which may disrupt a savings plan but there are several key aspects to consider in light of compound growth.  It is better to start saving consistently when you’re younger.  If something changes so you absolutely can’t keep saving you should, if at all possible, try to use current income instead of what you’ve already saved since that is what has the longest time to grow.  Lastly, it’s never too late to start saving but the longer you wait the more muted results will be just because you don’t have as much time for your savings to grow.

In closing it must be said again that this example started by stating “suppose you could get a constant 6% annual savings rate for 40 years”.  This is a highly unrealistic assumption.  The long-term investment problem has a myriad of complexities and just one of them is that returns are rarely constant over the long run.  It is the concept of volatility which capturers this variability of returns and will be explored further in future posts.  Nevertheless, this hypothetical example does show the power and the limitations of long-term compound growth.

Ready to get started?

At Adaptive Financial Solutions we specialize in helping you plan for, save for and to keep on track to attaining your financial goals.

Disclaimer:  The results in this post are all simplified hypothetical examples constructed merely to help understand the parameters of the mathematics surrounding the investment problem.  These are not actual investment returns that have occurred in any portfolio that Adaptive Financial Solutions has managed and they should not to be construed as returns that Adaptive Financial Solutions is advertising or claiming that it can produce.  Past results are no guarantee of future results and all of the information provided here should be discussed with an advisor, accountant or legal counsel prior to any attempt at implementation.